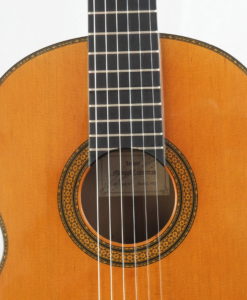 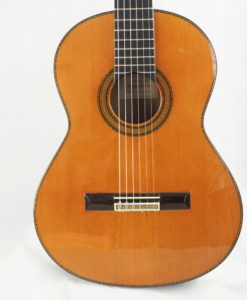 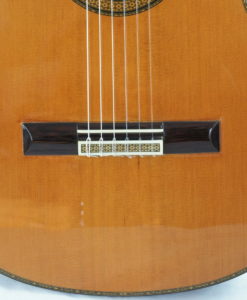 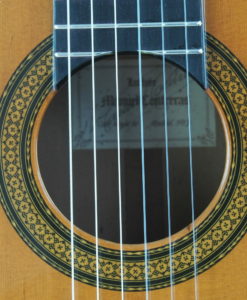 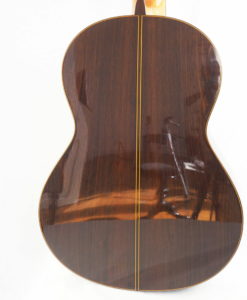 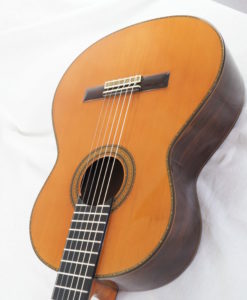 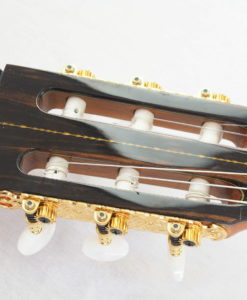 This Manuel Contreras I Doble Tapa has been made in 1987 by Manuel Contreras father when he was at his best. The Doble Tapa range represented the top of the line of Manuel concert guitars and was aiming at offering a louder sound be still with the same spanish tone color.This one is in close to mint condition and has been professionally repolished. A big very opened warm sound and a wonderful craftmanship. A real investment!

This classical guitar from the luthier Manuel Contreras I is in MINT condition. a great opportunity to acquire a wonderful guitar from a huge master at a reasonable price.

Among the guitar makers who highly contributed to the development of the traditional classical guitar, there are José Ramirez, Paulino Bernabé and Manuel Contreras. Manuel Contreras I (1926-1994) was surely the most inventive of the Madrid luthier – he invented a Harp guitar, a Alta guitar, the Carlevaro guitar and last but not least the Doble Tapa concert models. Contreras earned a reputation as one of the finest and most innovative luthiers in Spain. The Doble Tapa model includes a ‘double-bottom’ which is aiming at increasing the loudness of the guitar. The Doble Tapa has been played by prestigious players such as the Romero family.

This 1987 Manuel Contreras has been repolished by our luthier Regis Sala under the demand of the former owner. The guitar is in mint condition and has no crack whatsoever. The tuners have been changed with Gotho tuners.

The sound is loud and warmer much louder than a Spanish guitar but keeps the same tone color of Madrid luthier guitars. We strongly recommend to listen to the review video.

Here are some Bio information borrowed from Manuel Contreras website:

Manuel Contreras, born in Madrid in 1928, started his professional activity as guitar maker from the advantageous position of being a much sought after cabinet maker.

It was José Ramírez the third who in 1959, knowing of Contreras great reputation, invited him to join his guitar workshop. In three years he had developed his craft sufficiently to set up, in 1962, as an independent guitar maker in Madrid.

Although Contreras should not be considered as being a luthier opposed to tradition, his work reveals us a maker who was much more open than most of his contemporaries to new ideas and developments, what led him to work, from the early 70s, on various unusual instruments.

His first achievement, in this sense, was the design of the model “Double Top”, which Contreras presented in 1974, after a number of experiments in order to improve the tone, volume and projection of the instrument. The great acceptance this model immediately got in the professional guitar world (the first Double Tops, were closely followed during their process of construction and afterward used by the four mythical guitarists members of the Romero family) encouraged Contreras to continue with this innovative way of working, far away from the mainstream of classical guitar design.

To this period also belongs the “Guitar-Harp”, a very elaborated model in its construction, with a design of great beauty and a very powerful sound. As well as the “Alto-Guitar” model, a smaller instrument with a higher tuning than the conventional guitar. This instrument has been mainly sought after and appreciated, since then till nowadays, by the members of the prestigious Niibori Guitar Orchestra of Japan.

Contreras constructed the “Carlevaro” model in 1983. Based on an idea of the Uruguayan master Abel Carlevaro, it introduces a number of very original new elements, like the missing waist on the bass side and the lack of soundhole on the harmonic top.

In the mid-1980s, Contreras thought up the “Sounding Back Support”, a design that he developed, side by side with his son Manuel Contreras the second during some years, up to the moment when they definitively incorporated this item to their top line guitars. It was thoroughly designed to improve the sound response of the guitar in large halls, chamber ensembles, and performances with orchestra.